Okay, I have seen the installation instructions that come with these and they aren't very informational.  For myself (to remind myself later on down the road) and for anyone else out there who is handy, here are some better instructions to get the job done right!

First of all, you will need a soldering iron, solder and flux.  It also helps trememdously if you have an extra set of hands to help hold everything together while you do the soldering.  The biggest part of the job is not actually the soldering, but fitting the bridge to the fiddle.  If you haven't done this before, I strongly recommend that you let a professional do this.  Since the pickup is embedded in the bridge, if you mess up the bridge, you are done.  My instructions here are going to focus on the soldering part of the job.

Make sure that you do the soldering part away from the fiddle.  You don't want to accidentally drop hot solder on the instrument!

Start by putting the "cap" from the 1/4" jack onto the wire.  Make sure the threads are facing towards the jack and away from the bridge. 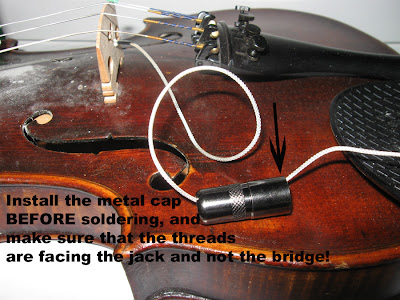 ﻿
Take a look at the three metal prongs that are sticking up from the jack.  They are three different heights.  You will not be using the middle one for this regular installation.  It will look like there is only one wire that comes out from the bridge.  It is a single wire in the center covered by a plastic shield, and then that is covered with a fine, metal braiding.  You will start by soldering the metal braiding to the largest and tallest of the prongs.  Be sure to use flux and only a small amount of solder.  You will then solder the single, center wire to the shortest prong.  Make sure that all of your soldering is done on the INSIDE of the three prongs.  Any wires or solder that are on the outside of the prongs will cause the cap not to fit back onto the jack. 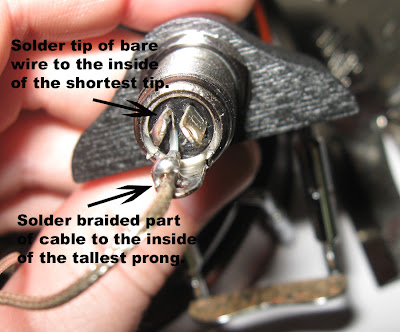 The following picture shows how there is no solder or wires on the outside of the prongs. 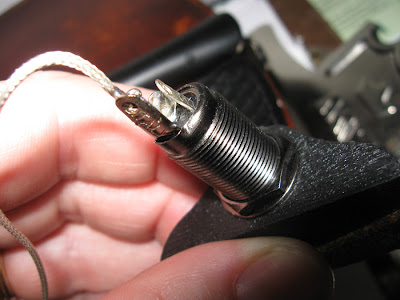 When you are done with all the soldering, you can install the bridge with the wire facing the tailpiece.  Install the jack on the same side as the chinrest.  Screw the cap back onto the jack.  It may look like the cap is not screwed on all the way because there are more threads on the jack than are on the cap. 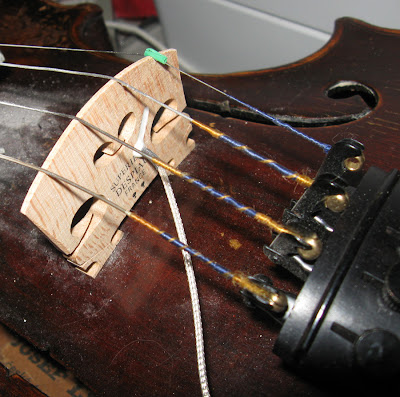 ﻿
﻿
You are now done and can plug the jack directly into your amplifier and check it out!
Posted by Chris Talley at 12:34 PM 5 comments:

It's nearly 3:00 a.m. and I can't sleep.  It's like this every year!  Tomorrow is the KSMU Youth in Bluegrass Competition that is held at Silver Dollar City (SDC) for their Annual Bluegrass & BBQ Festival.  If you haven't ever been to SDC for this event, you are missing the "Bluegrass Event of the Year"!

This year marks the 6th youth band that I have taught that has made it into this competition.  In fact, this group makes it six for six!  This year's newest group from The Bluegrass Shack is The Foxglove Pickers.  But let's not get ahead of ourselves.

The very first band that I helped with this competition was almost 10 years ago.  At that time, the Bluegrass Shack didn't actually exist.  I was teaching out of our home and had a wonderful family that was taking lessons from me that decided they wanted to be a part of this competition.  I really didn't know what it was all about at the time, and unfortunately I never even got to see them perform at Silver Dollar City.  The family that I'm referring to is the Robbins family, and the name of their group was Sibling Rivalry.  It featured three-time Illinois State Junior Banjo Champion Justin Robbins (who still plays and teaches by the way), and his twin sister, Jenny, on fiddle who was every bit as good as her brother.

After that, the Hall family band, known as Charlie & the Girls, wanted to get involved in this competition.  They won 4th place overall in the competition last year, and they are one of the bands that will be competing again this year.  They have wonderful harmonies, are multi-instrumentalists, and are so talented!

The majority of the bands that enter the Youth in Bluegrass competition are family bands.  When you think about it, how often can young kids get together to form a group of their own?  Bluegrass is different from your average garage band that plays rock music. Harmony is really important in this type of music, and this is a skill that must be taught to be done properly.  Many of the kids that come into The Bluegrass Shack don't have parents that have been involved in bluegrass music.  They might never have been to a festival even.  One of the hallmarks of bluegrass and folk music is the ability to play with others even if you haven't played with them before.  It is nearly impossible to learn this skill without playing with others.  I tried incorporating the kids with the regular jams, but it just didn't work out well.  Then I decided I would try to put several like-skilled students from different families together.  This plan worked out much better!

Several years later, the Pickin' Chicks made their debut at SDC.  Youngest member, Millie, was only 9 years old that first year, and this group of four girls was one of the very few that were not all from the same family and did not have an adult in their group.  (The rules of the competition allow for one or both parents to play with the youth group, but the rules DO NOT allow for others over the age of 21 to play in the group.)  Though their members have changed somewhat since the initial group got started, the Pickin' Chicks have placed 5th in this competition two years in a row, and will be competing again this year.  This very talented group of three girls will knock your socks off with their harmony and instrumental abilities.

The Worthing10s Family Band and Barbed Wire & Lip Gloss were the next two groups that came into the picture.  The Worthing10s are a large family band (10 members!) and are a real treat to see work one microphone, which is part of the competition.  Last year was their first year in the competition, and they ranged in age from three years old to 18.  Individual members of the group have won or placed in numerous fiddle and banjo contests, and Lucas is currently both the Illinois and Missouri State Junior banjo champion.  Their specialty is gospel music and they have a music ministry.

Barbed Wire & Lip Gloss was another youth band that was not a family band.  My student, Makayla, was head of this particular band, and was previously the bass player for the Pickin' Chicks.  She put her own band together, even though she was just a high school student, and then started using one of her own private lessons as a group lesson for several of her friends so that they could play as a band.  Makayla has a beautiful voice and is well-versed on the fiddle and several other instruments.  Her group was one of four bands from The Bluegrass Shack that competed in last year's competition.

So what about this year's newest group?  The Foxglove Pickers marks a milestone in getting unrelated youth together!  This group features five different families from four different cities, three counties, and TWO STATES!  There are seven members total, and they range in age from just 8 years old to 15 years old.  They have only been playing together for about 6 months at this time, so it was a real honor for them to have made it into this competition.  All bands must submit audition material, and then must wait for notification.  Only twenty bands from all across the United States are chosen for the KSMU Youth in Bluegrass Competition.  Practicing has been a challenge with this group because of the number of families involved, and simply the age of the kids.  With an 8-year old and three 11-year olds, a one-hour practice is all that is reasonable.  They meet once every two weeks, and they have done remarkably well.  My biggest joy with this group is seeing how much they like each other!  They all get along so well, and the oldest members take the younger ones "under their wing," so to speak.

I realize I have focused on the groups from our own store, but believe me, ALL of the bands are FANTASTIC and worthy of your time!  I have made so many friends.  The kids all get to know each other as well, and it is like a huge reunion every year.  D.A. Calloway, from SDC, is the one that heads up this amazing event (including all of the Bluegrass & BBQ event).  My hat is off to him.  He definitely has the world's best job and, likewise, is just as good at doing his job as the event is good itself!  Mike Smith, from radio station KSMU, has been the emcee every year that I have attended.  He does a great job announcing all the bands, explaining the rules, and then airing parts of the program.  I hope you will get out to see this marvelous event.  You won't be sorry!
Posted by Chris Talley at 3:19 AM No comments: