What's Been Going On?

Wow! What a year it has been.  Usually, I don't blog about anything personal, but this year has been full of both personal and business highs and lows, especially since Christmas.

Right before Christmas, both The Chris Talley Trio and The Pickin' Chicks started recording CDs.  For my student band, The Pickin' Chicks, it was their first.  What joy to see these young girls raise their OWN money that they saved themselves to pay for their project!  The Chris Talley Trio, though on its 6th CD, was recording the first one with 15-year Emily who had never been in the studio before.  She performed in the studio like a pro and we are all so proud of her!  The studio time and production time for the CDs has been the fastest ever.  We are now preparing for our joint CD Release Party, which is one week from today.  How exciting!

My biggest personal triumph has been figuring out the cause of my migraine headaches that I have endured for the past eight years.  At Christmas, they were so bad I was cancelling many lessons and it seemed I hardly had a day when I wasn't affected by them.  I was sent back to the hospital for another MRI and told to take yet a different medication.  Before I could even fill that prescription, a friend of my husband's told me magnesium had cured his migraines.  One bloodtest later and a trip to Walmart, and I was taking magnesium and on my way to feeling 15 years younger and headache-free!  After three months, my mag levels are normal and I went from having four headaches a week to just a couple a month.  Praise God for miracles, because believe me, this was truly a miracle!

It's been a little more than a year since I lost band member, Bill, to a brain tumor.  Next thing I know, band member, Zane, is having his second triple-bypass.  I spent the entire day at the hospital, sleeping off and on in a chair in the waiting room with his family and friends.  One week ago today, we had our first band practice since January.  What a relief that Zane is doing so well!  What fun that we are finally back together again!  That's a good thing, too, with our CD Release Party one week away and a Single Mic Competition at Silver Dollar City a month away!

In addition to all of this, both of my parents and my husband's dad have had surgery.  Some planned, some not so planned, but all with positive outcomes.  Just another reason to praise the Lord!

Now enter The Pickin' Chicks...this is a story all on its own!  In my efforts as a teacher to help my students learn to play together, I put together four girls that I thought were pretty evenly matched skill-wise.  This wasn't without much begging, pleading and arm-twisting.  Mallory, the guitar player, wasn't even playing guitar at the time!  She had given it up, while her sister, Nikki, was simply tearing it up on the banjo.  I could hardly stand to see these two talented young girls not play together!  The first bass player for the group got involved in high school activities and then I was faced with finding a replacement for her.  It's been about one and half years since these girls got together.  What have they accomplished?  Probably the first and foremost is that they LOVE playing together as a band.  They have found out that being in a band means a lot of hard work, and that something this good is worth working for.  They have endured many long meetings while we work out personal/band issues between both the girls and their families.  They have felt the joys of winning, the sorrows of losing, and the sting of jealously from others.  They have so many gigs that we have had to stop booking!  They opened for Missouri Boatride and played for a sold out crowd at The Falls.  They will be opening for Willie Nelson's Country Music Throwdown in Sparta in June of this year.  They have made their first CD.  All of this for a group that didn't even want to play together.  All of this with my sole goal for them being learning to play together.  I never planned for them to have their own website, Facebook page and CD...

Many of you know that my husband, Earl, is a retired police officer.  He was medically retired when his back was broken on the job.  It took three years for this to be resolved after his injury, but it finally was resolved.  For Earl's 50th birthday TO THE DAY, we found ourselves sitting in the courtroom testifying that he was still unable to return to police duty.  Imagine having to go through all of this AGAIN!  I can't explain what this is all about, but let's just say the pension board doesn't want to pay his pension or health insurance.  We have yet to hear the outcome, but we are praying daily.  How does a man who can't do many of the things he used to do, who has daily pain, cope not just with the loss of what used to be, but now the frustration of having to go through all of this again.  All I can say is that he is a wonderful man and I am blessed to have him as my husband.

Lastly, The Bluegrass Shack will be celebrating five years in its New Athens location as of June 2011.  Because this is such a huge milestone in and of itself, I will be dedicating an entire blog entry to this event soon.  In short, it's been an amazing journey with many more chapters yet to come!  We hope you'll join us for them!
Posted by Chris Talley at 5:00 AM 2 comments:

What makes a good student?  You might be surprised at my answer!  The good news?  YOU could be that student!

Not only do they practice regularly, but they actually practice what I ask them to practice and IN THE WAY I ask them to practice.  They might use a metronome, a recording or a loop technique (practicing one small section of a song over and over again).  They memorize their songs, chord progressions, or whatever else the lesson entails...even if it takes a while to get it memorized (like weeks or months for some).

They also prepare written material when asked, even if they aren't sure it is being done correctly.

2) Playing - My favorite students take the time to go through old material often enough that most of it can still be played, even if it means they need to go through it a few times to "reconnect" with it.

3) Jamming - My favorite students play with others.  This can mean jamming with a DVD, CD, the radio or with other people.  They understand the importance of going on when they make a mistake, and that perfect playing is not always the goal.

4) Questions - My favorite students aren't afraid to ask questions.  In fact, some of them have notebooks that they write questions in so that they can go through them during the lesson.

5) Reliable - My favorite students come to their lessons regularly, but even more importantly, let me know ahead of time when they can't come.  Interestingly enough, there are a few that have difficult work schedules, but they still manage to work with me so that we can make sure they get the most out of the lessons that they are able to attend.

6) Honest - My favorite students tell me what they need!  Maybe I need to slow down, be more encouraging, skip something or do something over again.  Whatever it is, they aren't afraid to let me know so that I can be a better teacher for them!

What may surprise you is that my favorite students are not necessarily my "best" or "most talented" students, though some of them are.  They might not even be in the top 50% of talent.  Many of them don't even have "natural" talent--they have learned talent!  (Or should I say earned talent!)  They bring me lots of joy because they are hard workers and they don't give up.  What more can a teacher ask for?

The best news of all?  YOU can be that student!
Posted by Chris Talley at 5:07 AM No comments:

The Chris Talley Trio and The Pickin' Chicks are having a joint CD Release Party on Saturday, May 7, 2011.  It will be held at 5:00 p.m. at the New Athens Community Hall.  It is FREE for all!  We are planning games, jamming, square dancing, and a potluck dinner.  Bring a dish of food and join us for the fun!

CDs and DVDs will be available for sale, as well as t-shirts and other items.  Guest bands performing in addition to the Trio and the Chicks include Charlie & the Girls, The Worthing10's and Dual Generation.

Click on the flyer for more details and directions.  We hope you'll come join us! 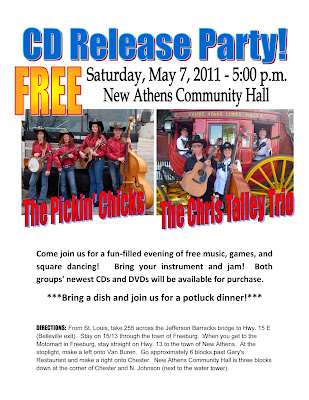 Posted by Chris Talley at 9:43 PM No comments: