I had an extremely full day yesterday at Our Lady of the Snow Shrine.  I taught three fiddle workshops and one guitar workshop, and then The Chris Talley Trio played in the evening concert.

The workshops were full and went extremely well!  I had a great group of people for all four of the classes.  The three fiddle workshops were set up as progressive classes, starting with beginning fiddle in the first class.  Some students attended all three of the classes.  We talked about everything from the very basics (like how to hold the fiddle and bow) all the way to topics like instrument setup, exercises for double stops and vibrato, and left-hand flexibility.  Everyone got to ask questions, and there were some really good ones asked, too!

The guitar workshop was also a success.  I had students ranging from never played before to proficient with chords for years.  We started with basic left-hand positions and talked about several ways to make the G chord.  We learned G, C, D and an alternate A7.  We talked about why to use certain chord fingerings, but that none of them were "wrong."  We learned basic three note run patterns for G, C and D, and then we put them in a song.  We also learned a very simple flat-pick version of Bile Them Cabbage Down.  After that, we talked about the capo and transposition.  It's actually hard to believe we covered so many topics!

The evening concert was unbelievably awesome!  Since this was a dulcimer festival, all of the groups had dulcimers in them except my group.  That's because I'm the only one who is hired for something other than dulcimer.  There were both hammer dulcimers and mountain dulcimers.  One thing that is really cool about mountain dulcimers is that they can be played in way that makes them incredibly easy or incredibly complicated.  This makes them good for kids, and also good for adults of all levels of musical experience or inexperience!  The hammer dulcimer is simply beautiful sounding, especially in the hands of Rick Thum.  The chapel at the Shrine has a sound that is unmatched.  It is all hard surfaces, so it's actually quite complicated to use a sound system there.  Everything is so "live" that feedback is hard to contain.  When it's right, though, the sound is wonderful!  There was a full crowd there, which is probably 200 - 300 capacity, but it sounds like 5,000 people when they clap.  I love playing there.  This was the fourth year for me and I always look forward to it.

After the concert, my husband Earl and also Emily and her family all met at Denny's.  One of my favorite things about having a band is the comraderie.  Zane and Carla weren't able to meet us, but it was nice even having only part of the band.  Emily had never been to Denny's before, so that made it especially fun.

Now that it's over, I'm simply worn out and I have lost my voice!  It's a good thing it's Sunday and a day of rest.  I sure need it.  I wouldn't have traded yesterday for anything in the world, though.  Thank you to everyone who made it so much fun for me!
Posted by Chris Talley at 4:08 PM No comments:

For those of you wanting to take advantage of some of our workshops at Lake Sallateeska, you should make sure you sign up right away to reserve your spot.  All of the workshops still have space available, but the Knowing Your Banjo Inside & Out workshop is more than half-way full.

Also, The Red Haired Boys will be playing at the Saturday evening concert.  They are not on the flyers unless you pick up the new ones here at The Shack.  You will surely enjoy their music!  You can visit their Facebook page at http://www.facebook.com/pages/The-Red-Haired-Boys/318310063761.

If you want to stay at Lake Sallateeska, call and make your reservations soon!  Be sure to ask for the bluegrass rate, which is substantially less than their normal rates and the rates you will see listed on their website.  If you need more information on the retreat or the workshops, take a look at my previous blog entry, which includes links to all the flyers and forms.  If you still have questions, feel free to e-mail or call us!
Posted by Chris Talley at 11:31 PM No comments:

We're in the Local Newspaper!

This article came out in the Business Section of our local New Athens paper.  Many thanks to Cathy Meggs for her support!  Click on the photo to enlarge it. 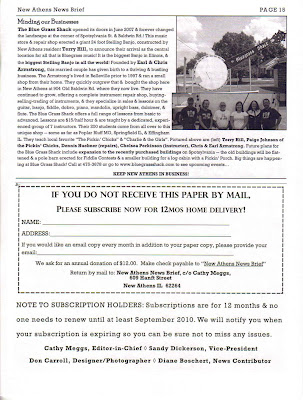 We had a wonderful weekend at Arrowhead Campgrounds in Grassy, MO this weekend.  The Chris Talley Trio played Friday and Saturday for the annual August bluegrass festival.  The weather let up a little bit, so we were actually quite lucky -- no rain, and the heat was tolerable.

I think every kid I saw was soaked from head to toe from the Castor River!  That was always my favorite part of this festival when I was younger.

Emily did a great job playing with The Chris Talley Trio.  She also played with her family band, Charlie & the Girls, so she really got a workout.

There were so many friends there, I can't possibly thank every one of you by name for coming to support us.  Please know that you all are much appreciated!  Here is a link to a couple of videos from The Chris Talley Trio's Friday night performance.

Posted by Chris Talley at 9:58 PM No comments:

The Pickin' Chicks played today at the Swanwick Picnic in Swanwick, IL.  They were hired to play for one hour between 4:30 and 5:30 p.m.  About half-way through their set, the guy that was hired to play after The Pickin' Chicks started setting up his equipment during their performance.  He walked in front of them several times, moved one of the girls out of his way to put up one of his monitors, and then proceeded to stand on stage with them for the last 15 minutes of their performance while he messed around with his microphones, stands and other equipment.

When asked by two different people to stop, he gave the scathing reply that he was being payed to play and the girls were not.  Then he proceeded to brag about how he had been hired for this gig for the past 21 years.  After that, he totally cut down the very people that had hired him by saying they were weird and that they would be angry if he didn't start playing at 5:30 p.m. on the nose.  (Which didn't happen, by the way.)   Since we were both hired by the same person, of course that person would understand there would be a short time where the PAs would be setup and dismantled.

When the lady in charge heard about this, she apologized for him to the girls.  She said she thought he would have been more professional and that she would have put a stop to it if she had been there.  I hope that other musicians and bands can remember to treat each other nicely.  After all, we're all in this together!
Posted by Chris Talley at 10:18 PM 3 comments: