Promote Your Page Too

So how was it?  In one word -- AWESOME!  Our third annual show was by far the best we've had.  We had the largest crowd and I also think we had the best overall show and crowd response.  Based on armband sales and chair counts, we had somewhere between 300-350 people total.  Some people came for just the Hee Haw Show, some for just the Jamboree, and most for both of the shows.

We kicked everything off with 7-year Audrey playing and singing Rocky top.  She's not only a cutie, she's very talented! 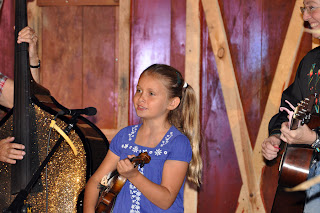 We were really blessed this year by professional Minnie Pearl impersonator, Marietta Bigham, and her "side kick" Ed Jeffs.  They both did a fantastic job! 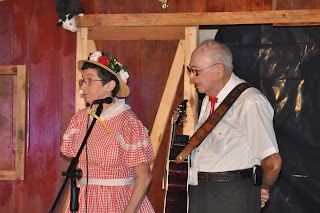 We had quite a few guest appearances that were well-portrayed by local musicians and singers.  These included Makayla as Loretta Lynn, Lucas as Marty Robbins, Gary as Kenny Rogers, Zane as Hank Williams, Bethany as Dolly Parton, Rebekah as Patsy Montana, Dan S. as Johnny Cash, Dan F. as June Carter Cash, Lucas and Matthew as Roy Clark and Buck Owens, Terry H. as Grandpa Jones, Dennis as Willie Nelson, Larry as Julio Iglesias, and Terry L., Denise and Chelsea as the Soggy Bottom Boys.  They not only sounded great, but they were all incredibly entertaining! 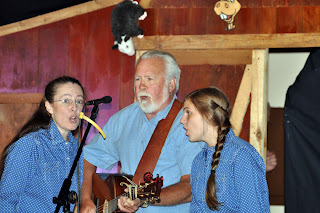 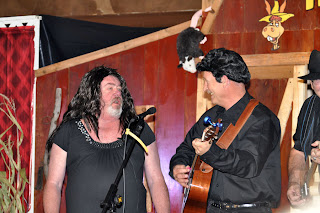 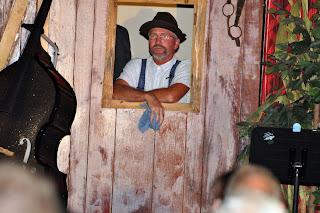 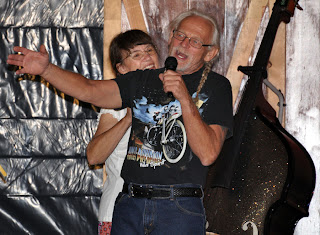 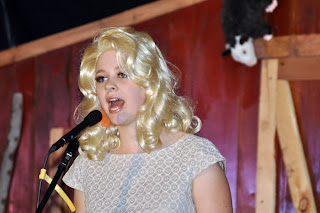 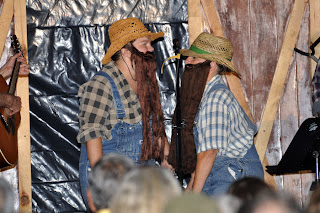 And of course, no Hee Haw show would be complete without Gloom, Despair & Agony or Gossip Girls! 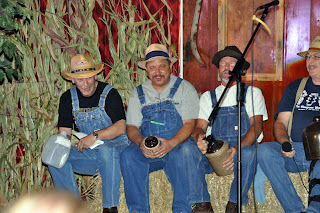 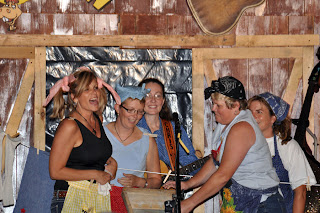 We had many youngsters that participated in the show, helping with cornfield jokes, singing and other various necessities! 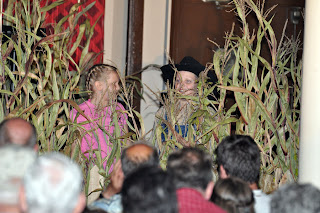 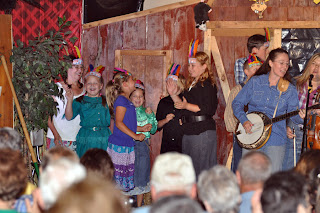 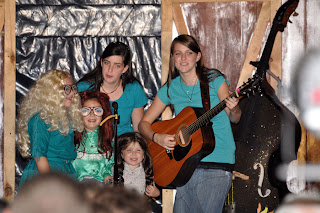 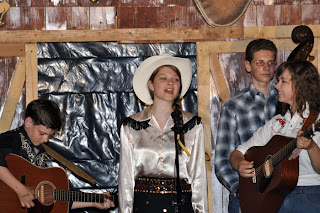 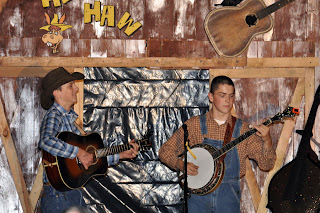 We had several bands, including the Voegele Sisters, Dual Generation, the Martin Family, and the Buries that performed songs for the audience. 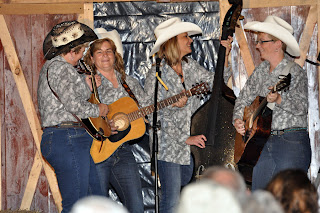 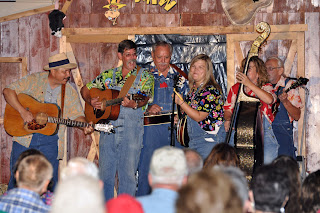 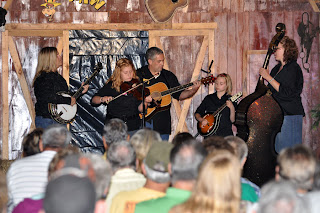 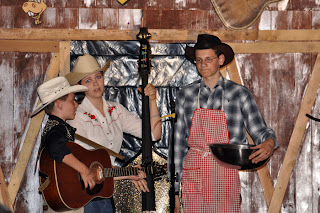 We had Psst! She Wuz Gone complete with the kick-board fence!  (We could have charged admission for everyone to try out the fence!) 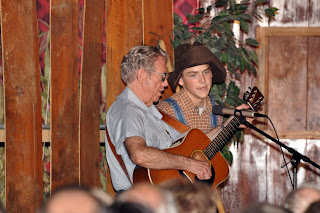 And then you have those acts that just don't fit into any category!  Take, for instance, Lucas and Heston's absolutely fantastic version of "Who's on First"?  I would put it up against the very best! 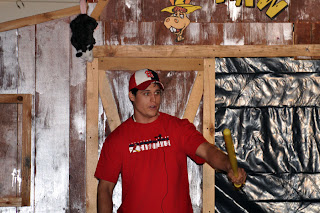 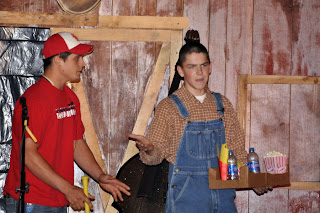 And how could you forget the real wedding that was hidden at the end of the show?  We had several smaller skits that led up to the wedding, and it took folks a minute to realize this was a real wedding! 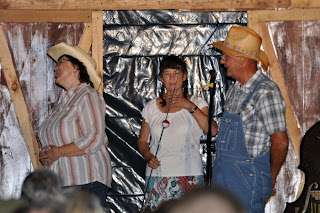 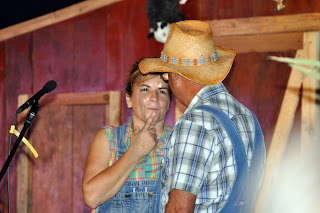 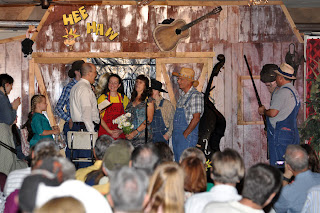 We have so many people to thank, but probably top of the list would be Terry and Becky Hill, who worked tirelessly to build the entire set, which was no small feat!  Our barn by itself was almost 10' tall by 16' wide.  With the added sides, it spanned an awesome 32' long!  Then we had the cornfield and the kick-board fence, too! 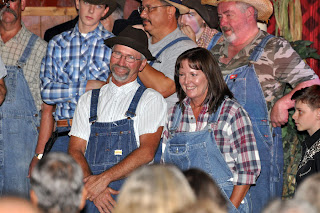 And of course we have to thank Bob Junge who provided me with all these great pictures!  I don't have a photo of Bob, so my words will have to suffice!

The Bull Pen (where we held the show) was extra gracious, especially since we had to change venues less than a week before the show.  They provided all the food and allowed us to use the entire week to erect the Hee Haw set.  We would not have fit in the previous hall that we had intended on using.

Denise had a banner made for us to help us with advertising.  We hung this at the entrance to the Village of New Athens so all could see. 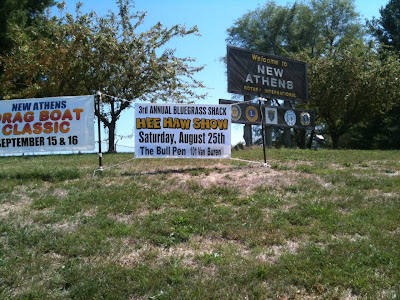 We had more help with advertising from the New Athens News Brief, the Belleville News Democrat, the Bull Pen, and KDHX FM 88.1 radio station, and many other people who helped distribute posters and flyers.

We had a helpful setup crew and an even larger cleanup crew, all of whom are appreciated very much!

If you want to see more pictures, go on out to The Bluegrass Shack Facebook page.  There are even more pictures posted there.

Here is the entire Hee Haw crew at the end of the show.  We were all singing Amazing Grace, including the audience.  I think we had the world's best audience! 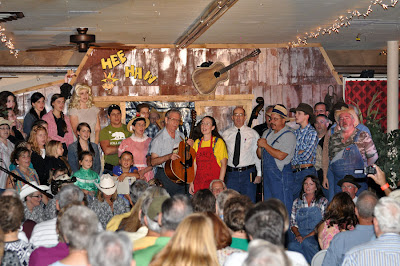